Books out! Class work! Subject: Geometry. What do all these rectangles, circles, dots, and triangles mean to you? It's not so old-school when Werner "Zappi" Diermaier presents his geometrical forms. But the question that bandmates and the audience at the California Institute of the Arts were confronted with was a rather similar one: How would you transform the graphic score, which is currently projected onto the screen, into acoustic signals? The result was a wildly meandering, high-intensity, 23-second symphony, in which the onomatopoetic knot bursts. "It's a sort of dadaist choir, a musique impressioniste," says faUSt founder Jean-Hervé Péron. "People participated right away." "Sounds like a sporting event! And the audience screams: Hurray!" says Zappi Diermaier. Two perspectives on one idea from faUSt. Very good! Sit down! Continue!

But let's start from the beginning. faUSt has recorded a new album. It is entitled "Fresh Air" and differs in several respects from its predecessor "Just Us", from the year 2014. At the time, the recordings were made at Péron's rehearsal studio in Schiphorst and Diermaier's house in Hechthausen, hypnotic pieces with the kind of noisemaking the band is known for. For the new album, Péron and Diermaier were looking for communication with musician friends and the audience. The tracks were recorded in changing ensembles at changing locations in the USA (during a 28-day tour in March/April 2016).

In these community recordings, with friendly support from the artists' database of field recordings, a strongly shaded noise music emerged which extends its feelers to the remotest corners of the here and now. Droning, swinging, lusting for freedom, here and there holding out quite stoically as machine-room blues. Or just phonetically - along the geometry. On board are the freely fabulous Barbara Manning in a live lecture, Jürgen Engler (Die Krupps) in overdub and Ysanne Spevack as a wonderful wavemaker on the viola. The seven and a half minute title track, which faUSt deliberately placed at the beginning of the album ("so you can enjoy it for a long time," says Zappi Diermaier), begins with the poem by a French school friend of Péron (translated and recited in Polish) and ends in an industrial sound inferno. The singer cries for "Fresh Air" as if it is being taken away from him. Jean-Hervé Péron offers a political reading: "Can you breathe calmly here, or are we being poisoned?"

"Engajouez vous!" Péron presents this franco-faUStian artificial word to the audience and rewrites the Marseillaise for the here and now in the track "Chlorophyl": "Allons enfants de l'Anarchie, notre jour de jouir est arriveÌ". The call results from wild horror at a collapsing world: "Artists, engage through your songs, L'art pour l'art is finished." Péron quotes with his voice, above the polyphonic undergrowth that colleague Zappi so nimbly unleashes, and Barbara Manning sneaks word sketches from her bag of tricks into the hymn. And finally, Zappi has his mini-dada performance with "Schnobs" and "Bia": a small dialect-based text piece, which starts with Chlorophyl, goes over the meadow past the cow and lands with the farmer who drinks a beer and a schnapps and suddenly sees two cows. "Is it from the chlorophyl?"

Good question, but no answer comes. At the last moment, these texts also want to join in the shuffle. The words and music and noise fall together continuously, sometimes a track is created completely from the free interplay of the forces that emerge when the musicians in the session approach each other. "Enlightened dilettantism" is the term used by faUSt. The story of the band can tell that tale nicely.

As Krautrockers, the musicians had a worldwide career. On their first three albums in the early 1970s, they inhabited the vast field from improvisation to bricolage to rock'n'roll with the ease of rogues and the determination of declared sonic renegades. They were big in Britain before the notion of Krautrock had made the rounds in Germany. One can still feel the breathing of this music, the bubbling of this primal soup, in current faUSt pieces, in the stone-age thudding of "Fish", which faUSt anticipated in 1972 on "Mamie Is Blue". But you will also be able to distinguish the as-yet- unheard if you allow yourself enough audio time. The sound of a squeaky door for which the musicians have the same kind of enthusiasm others might reserve for a brilliant guitar riff ("gripping, touching"); or the minute-long fadeout of "Fish", which Zappi Diermaier is so excited about. The only plan is for the band to take off without a plan. "We let the music play through us," says Jean-Hervé Péron. Everything else is up to the listener, to make his own film. Jean-Hervé Péron has a little tip for us: Listen to the fish.

"As a jumbled response to unfolding chaos on Planet Earth, Fresh Air delivers a welcome jolt of energy." Wire 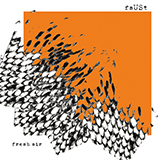