In today's increasingly barren rock and roll landscape, Ulan Bator stand as beacons of explorative songwriting. Formed in Paris in 1993 by Amaury Cambuzat (vocals, guitar and keyboards) and Olivier Manchion (Bass), the band's atmospheric approach to composition has consistently yielded guitar-driven avant-rock at once hypnotic and untamed. And while their sound has developed in a variety of directions – often in relationship to changing line-ups and various collaborations, including with krautrock legends Faust and Swans' Michael Gira – Ulan Bator's resist simple categorization: kraut-y repetition, post-rock guitar flourishes, kosmische synth work, intimate whispering and pounding drums have all taken an audible lead throughout their now twenty-year career.

2017's Stereolith sees band mainstay and founding member Amaury Cambuzat continuing on in a tradition of experimental rock and roll, currently projected through a contemporary prism of electronics and synthesizers. Written while touring Ulan Bator's 2016 album Abracadabra through Italy, Cambuzat pieced together the band's 12th LP on his laptop in various hotel rooms before eventually rerecording individual drum, bass and guitar parts in the studio. The result is a crispness in sound that resists typical psych- and experimental cliches of washed-out und contourless improvisation. But perhaps the most impressive – and surprising – aspect of the album is its epicness. The songs on Stereolith achieve a grand, looming presence despite their relatively short lengths.

While the Stereolith's longest and most obvious genre-nod "NeuNeu" clocks at a pleasantly meandering five-and-half minutes and features explorative guitar work reminiscent of Michael Rother, most of the songs on the album clock in at under 4, with dreamlike atmospheres established from the get go. An excellent example is "Blue Girl", which opens moodily with deep sustained piano, gongs and industrial bleeps before exploding into a playful postrock groove that plays off Popol Vuh-like synth vamps. The song could easily continue for 10 minutes, but Cambuzat appears content to imply an endless groove without actually simulating it. That quality continues on album standout "Ego Trip", sung by Cambuzat in both French and English. The song's various melodies – harpischord, chorus bass, guitar – shift over a steady chord progression to create a glorious interweaving, while slightly above the din, Cambuzat intimately recounts what sounds like the wounding words of a spurned lover. "She said you're not a star," he intones, converting someone's pain into music to our ears.

Elsewhere, Cambuzat's non-native approach to writing in English, like that of Björk or Damo Suzuki, borders on the surreal. "I lost myself in a spinach can," he murmurs on "Spinach Can", evoking a lysergic-tinged scene from an episode of Popeye, which he soon takes into deeper, darker waters by adding, "I crossed the ocean of tears and blood." By the end of the slow, dirge-like final bursts of album closer "Dust", it becomes clear that in Cambuzat's world, the dark, the light and the strange are comfortable bedfellows. It's an atmospheric ménages-a-trois that occasionally pushes beyond the boundaries of taste and coolness into vaguely new-age-y and adult contemporary territory. Which is what makes Stereolith both far more interesting than most rock and roll today – and inviting for multiple listens. "The music is best listened to in a 3D pyramid, in the middle of the Pacific Ocean," the singer said in a recent interview. Short of that however, closed eyes and open ears will suck you deep into Ulan Bator's shadowy universe. 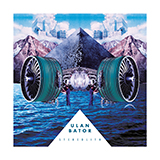